A roundup of the latest questions that I have been asked through formspring.me.

Now I haven’t done this roundup for a while, the last one being about four months ago (had problems with formspring talking to WordPress), so there’s a bit of a backlog unfortunately.

Who are the 5 people you talk with the most on Twitter?
I really don’t know, it varies from week to week

Have you been dared to do something sexual? If yes, what was the dare and did you do it?
Nope I haven’t

If you could go to any era/decade/time, and live there what one would it be and why?
1920s America, I love the fashion! Even thgh I prolly wld have ended up in a mental asylum

Have you ever fantasized about participating in a gang bang (giving or receiving)? And have you actually participed in one? If yes, would you do it again?
Yes I have fantasized abt being at the receiving end of a gang bang, both male and female 🙂

Do you believe alcohol or any other mind altering substance enhances or hinders sex? If you have a story of a good or bad experience, feel free to share it.
Alcohol does both for me. On the one hand it lowers inhibitions and can increase a guy’s duration. But on the other hand it can make people say stupid things and make it so people just get tired instead of in the mood.

What’s the secret to happiness?
Haven’t found it yet

Would you stay alone for a night in a haunted house for ten thousand dollars?
No

If you could live a day in the life of anyone throughout history, who would it be? Why?
No idea sorry. Enough trouble living my own life

If you could have an endless supply of any food, what would you get?
Vanilla cupcakes 🙂

Do you have a sexual fantasy you might have second thoughts about if the opportunity actually presented itself?
Gang bang

What’s the one thing that gets you most aroused?
Being taken charge of, while still being respected

Best position to be caught in??
Only been caught once in missionary

You have a whole day to yourself, what do you do?
This happens often, I’m boring and read or watch tv

Can certain exercises really lead to better sex?
Thts not my area of expertise

Ask me absolutely anything!

I saw this little list over at Mrs Discontented’s blog and thought I might give it a go. It’s a sexual bucket list of 50 sexual things you should do before you die and can be originally found here. Should be fun 🙂

And there you have it! Possibly more than you ever needed to know about me 😛 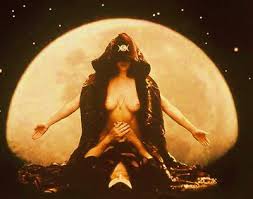 A conversation with Alexis (flexibeast) today got me thinking about the connections between my own sexuality and spirituality. Some of the following is directly quoted from Alexis from our GTalk conversation and are used with her permission.

My beliefs are very eclectic. I used to practice Wicca, so I still have a little bit of that influence along with some broad Celtic/Nordic influences, particularly St Brigid and the Tree of Life. I was raised Anglican and was confirmed when I was 16. Shortly after then was when I first delved into pagan spirituality. I do believe in Jesus, but with an Islamic view that he was a prophet. I also believe in reincarnation and the belief that our own spirit chooses lessons for us to learn before this life begins. If you commit suicide, then you have to start that life all over again with the same lessons and problems. It’s this belief that has saved me from myself on several occasions. Alexis put it brilliantly with this quote:

I’m a firm believer that all religions are different perceptions of the same thing. There’s more than one path to the top of the mountain so to speak. It makes sense that if all paths lead to the same place, that you can take bits of the different paths that work best for you.

Spirituality and sexuality are so incredibly linked together, something Alexis and I both agree on. We both have had problems finding others who share this belief. While there are examples of solo sexual ritual:

Generally there seems to be the idea that “sexuality and spirituality are mutually exclusive”.

alexis:
*nod* Obviously i feel the same way [that sexuality and spirituality are so incredibly linked together]. 🙂 But often when i’ve tried to talk about this with other pagans, i get the “you’re just a swinger” thing, either openly or implicitly.

Fae:
it’s hard to find people on the same wavelength sometimes, especially when the way you feel about things seems so different from the way the majority thinks

alexis:
*nod* Yep. E.g. most sex-positive peeps i’ve come across seem to be atheist, and sometimes stridently so.

Fae:
*nods* i’ve found that too

alexis:
*nod* Which is why it’s wonderful to be able to talk to you about this stuff. 🙂

alexis:
😀 So if i may ask, how does sexuality appear in your spiritual practice(s)?

Fae:
honestly at the moment there isn’t a lot, if any… J considers himself an atheist [i think he’s secretly agnostic] and i haven’t found a suitable partner for the spiritual/sexual aspect yet

alexis:
😦
(Metacomment: Please let me know if any question i ask is too personal!)

Fae:
i will 🙂 i’m pretty open about everything

alexis:
But if you did have a suitable partner, what sort of stuff would you be interested in doing?

Fae:
interesting question, honestly i don’t know the answer… i haven’t really looked into which rituals would be suitable because i’ve never had a suitable partner

alexis:
Ah. Well, for myself, i’ve been doing the masturbation-as-meditation thing.
But also i’ve found it difficult to find prewritten rituals in any case, mainly due to cis- and hetero-centrism.

I suppose that’s one of the problems with not following an organised religion and being a solitary practitioner, there’s no set way of doing things.